There are many stranger than fiction stories in teaching of which every word is true.

However, thrice a year teachers have to do something called exam invigilation and during these sessions it is alarmingly easy to become delusional. (OK, I cannot speak for everyone, but I have an active imagination and a few other flaws, so invigilation brings out the wack in me.)

Just the other day things transpired like this:  I invigilate in my own class. It’s the final exam (November in South Africa, yes) and the Grade 11s are writing Science for 3 hours.

As an invigilator you have a few duties. Get the students ready well ahead of the starting time, hand out paper and question papers, read through the instructions with them, page through the exam paper with them to make sure they all have properly copied question papers. Then you allow exactly 10 minutes reading time … before you tell them to start. You also write the date, subject and time allowed on the backboard as well as an indication of the passing time. I do this with a timeline using 15 minute increments.

You have no idea how long 15 minutes can be until you invigilate.

Once the exam session has started I usually take around the attendance register, then I date and sign it and make a note of absentees on another slip of paper which is returned to making teacher. After that, I hand out more paper.

When all this is done … there is almost nothing to do until the time is up. You are supposed to walk around among the students, you may not sit or read or listen to headphones or eat or do anything. You must watch the students and indicate the time … and it feels like you can go insane.

Once the students start doing the question paper they completely lose awareness of your existence.

One simple way to prove that they lose awareness of your existence is by giving an instruction after they’ve started the paper. For instance, should you tell students to staple the question paper to the back of their answers after the session has started no one will even hear you and at the end of the session the students will, one by one, raise their hands to ask this exact question. You’ll have to answer each one separately. (Which serves you right, you idiot.)

Many times I have also wanted to test this theory by doing cartwheels in the class, but I cannot do cartwheels. The thought of changing into a different shirt has crossed my mind many times, but if one kid notices this I would lose my job … and I actually quite like my job.

Outside my class is a beautiful tree – at the moment in full bloom. As the Grade 11s get engrossed in science, I start imagining a tree snake in the tree. My neighbours have a tree snake in their garden, why shouldn’t I have one in my tree. With all the little birds and all the life the tree houses why not also one boomslang (it’s the Afrikaans word for tree snake). The tree snake has deadly hemotoxic venom, but it’s a slow acting venom and the tree snake is docile and unlikely to bite. They’re called tree snakes because it is really unlikely you’ll ever see one on the ground. The males are a dirty green, but the females are soft brown on the back with white tummies.

It’s a female tree snake I imagine in my tree. It is a rainy day and unusually cold for November. The boy closest to the window is only wearing a school white shirt and clearly cold. I imagine my tree snake forming a scarf around his neck. This boy wears a scarf throughout winter. He was hard to keep quiet last year and a snake around his neck might just do the trick. But right now he’s not doing anything to bother me, except that I feel cold on his behalf, and tree snakes don’t smother their prey … I put the idea aside.

Illicitly I post the snake fantasy to the teachers’ WhatsApp group and a kind soul shows up to give me a coffee break.

I make the mistake of checking my email in the bathroom. When the Oscar case first hit the headlines in SA people all over the country asked, “Whatta dat girl doin’ in da bathroom witha phone?”

As I often point out, I only speak for me, but I always take my phone to the bathroom. Always. And I’m not even about to explain why to those who don’t, cause it’ll be a waste of my time. What I will say … our school now has WiFi everywhere, but by some conspiracy, the women’s bathroom is a dead spot.

So as I get back to class with some coffee, I worry about mail I should answer, but can’t during invigilation – I also shouldn’t have coffee, so don’t tell anyone.

Now I’ve noticed the wise guy in the other corner – also in shirtsleeves – shivering. He’s too far for the snake scarf, I have a jacket in my car, but maybe he has one closer … off I wonder for his opinion – which for once he has – he’s cold, and yes, he wants me to close the windows. He’s not asking for his own jacket, presumably, he didn’t bring one.

I don’t feel that I’ve quite provided the warmth I would have been proud of, but I close the windows. I feel helpful, I’m pathetic.

Some time later another well-meaning colleague shows up to give me a break, but I assure him I’ve had one already. Of course two minutes later there is another message that should be answered … FOCUS! I tell myself. Do your day job!

Now we are past half way in the paper – no one feels any relief at this – but we all notice an annoying sound emanating from somewhere outside.

I cannot see outside the windows unless I climb on the row of desks there. No one is sitting there since the science class is not that big. I decide it cannot be a violation of any protocol if I climb on a desk next to the outside windows.

Some students do notice, so I must be wrong about the shirt thing, but from up here I can check them all with the vantage of height. Of course, if I were to “donner” down from here I might never hear the end of it. Annoyingly, from my window, I cannot see the offensive sweeper.

I have to – CAREFULLY – move on two more desks. The science students not engrossed enough in science notice … oh well.

After not breaking anything in getting to the third desk – and still carefully checking my inmates, I mean students, I am at a vantage point where I can see the source of the offensive sound.

One of the workers is sweeping the hundreds of millions of yellow blossoms from my tree into a bag … why? Did someone tell him to do this? Those blossoms are beautiful and his actions remind me of the municipal workers who sweep the Jacaranda blossoms off the road surface this time of year. Why do they do it? Tomorrow there’ll be more and they are beautiful. People can just walk through. Why do they pick these flowers up? 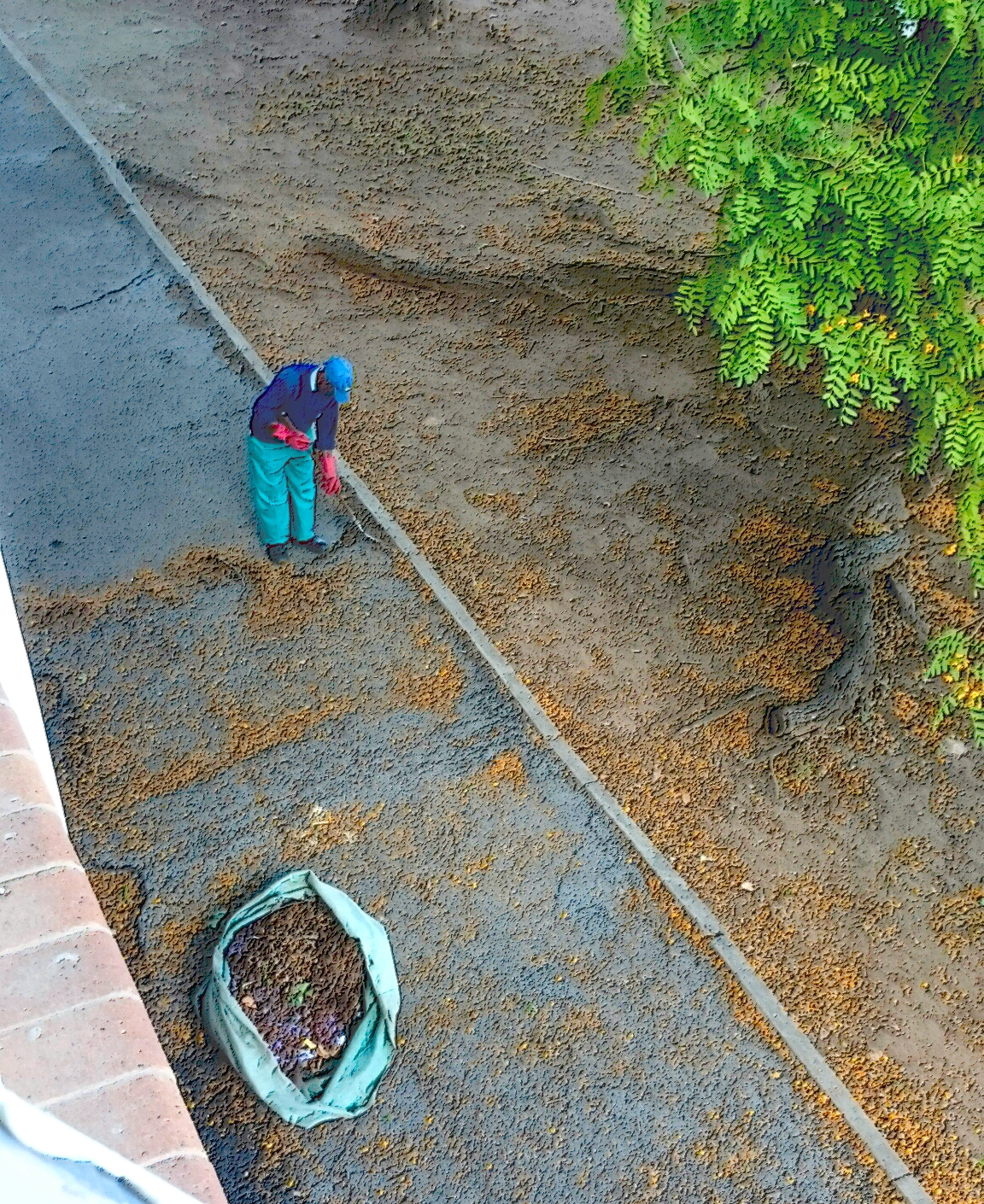 I decide to take a pic with my phone … for all the times I thought my job was pointless. Unfortunately, the poor worker, the same guy who cleans my class, notices that he is being inspected from above. I try to indicate that all is OK, but to my colleagues’ group I send the pic with the caption: And I thought my job was pointless. (I feel bad, but only for a few minutes.)

By now I’ve ventured down to the floor without mishaps – checked off the time on the board and noticed that there is once again an annoying fly frequenting the front fan. The closest person to the front fan is the girl who have asked for paper most often. There is one desk between her and me.

This fly has shown up at various times and I would have hoped that it’s life span woud have been over by now. Today, I will take the fly by the … rapid zigzag motions it makes … but how?

Aha, this reminds me. This is part of why I hate exams. While we teach we have aha-moments in class (well, some at least) and during exams we don’t have them … and I tend to live for them. Now my aha-moment is the magazine in the corner I could use to kill the fly. I’m being optimistic, of course. I’m short. I’ve never tried this before. There’s a kid right in front of me and I cannot swing wildly and viciously … teacher reputation to think of … I would have to succeed without too much embarrassment, and without injuring a kid.

Now I pounce around with a rolled up magazine.  I wait. Probably longer than needed. At last, I have a chance for a strike and take it. The fly is gone. I feel great, but if it is not somewhere on the floor then it is not dead.

Before I look I must indicate the time again. Now I look, and look and look. And just as I thought it was going to be hard I find the silly fly on the floor – it looks dead enough. I should have whacked it once more just to be sure, instead, I picked it up and deposited it in the bin … feeling much too proud.

After all that I made it to the end of that session and another one, and soon there’ll be another one.

Despite all the insanities, I love being a teacher.