Let me tell you what we’ve done so far in terms of medical tests. It isn’t very much. The majority of tests are still coming and before then I have to lose weight.

The sad thing is that nothing much happens in terms of organ donation during  December holidays. Transplant teams take annual leave.

What happens to scores of viable organs left in the carnage on South African roads, is anyone’s guess.

Potential live donors are registered on the medical aids of the recipients, but this only happens after initial testing.

At first, there are all the easy tests. Name, a copy of your ID, blood pressure, glucose, cholesterol, waist, height and weight for BMI and family history.  Your BMI must not be above 33 and mine is scratching that.  Initially, the transplant coordinator wanted to know if I had recently gained weight, but when I told her that I had actually lost a significant amount, she was much more positive. I still have to lose more, though.

Stephanie, who has been more than supportive in my diet throughout the year – long before we talked about donation, keeps asking if the extra weight is “behind my eyes.”  Of course, it isn’t, Stephanie. But let’s leave this topic for later.

Next, I set off to my local pathology lab with a referral in hand. This was where the fun started.

The page I had received from the transplant coordinator had marked off Full Blood Count, Blood Group (I suppose they don’t take my word for this), Creatine Clearance, Urine MCS (I don’t really know what that is) and … 24H Total Prot. Excretion.

I vaguely remember visiting the bathroom before going to the lab. That was a mistake.

At the best of times, I need total privacy in the bathroom. Hospital bathrooms, hovering nurses and small plastic containers have the effect of making me forget how to perform this basic bodily function.

Fortunately, no one hovered, unfortunately, I just didn’t have much to offer. When you’re already in the stall, it’s too late to open a tap and in the midst of a nationwide drought, doing so might be criminal, anyway.

I suppose every girl has her own little trick for situations like these. Mine is to sing “Let the river run” from Carly Simon to myself. There are, however, three problems with this strategy: 1. My pathetic voice cannot reach even the first notes of that song. 2. No sensible person sings in public bathroom. 3. Uhm, I use the same song when I suffer from constipation.

It was only with mustering all my enthusiasm about organ donation that I produced a few drops in that little container.

Oh, I forgot to mention how I was instructed first to wipe myself with damp cotton wool … and provided with what seemed like an extraordinary number of little balls of the stuff. Off course, wetting these balls has to be done outside the stall and then you, your cellphone, wallet, foam-o-lite cup, green lidded urine container and the wet and dry cotton wool can enter the stall … but where do you put everything?

My relief was exquisite when the nurse back at the lab did not dismiss my few drops as being too little.

But next, she produced, as if from nowhere, this:

Then I was carefully instructed to cut the top off a 2-litre bottle, use the bottom part in the loo and the top part to get the urine into the can.

The exact time of those first few drops was recorded and I had to return the can at the same time the next morning.

I think it was after this that they also took around 3 phials of my blood – by far the easiest part of the whole thing.

Feeling somewhat intimidated leaving the lab with my can, I immediately Googled “normal urine output 24 hours” and learnt that it should be between 800ml and 2-liters for a normal water intake of 8 glasses per day.

So initially I thought that I would aim for 1.5-liters and be happy, but there were no external markings on this can … and that is not quite me. Of course, being A+ I tend do adopt an A plus attitude as well and once you start drinking a bit of water and a few cups of coffee (which is a pleasure anyway) you’ll be surprised at how well things progress.

Here I was just getting into the swing of things. 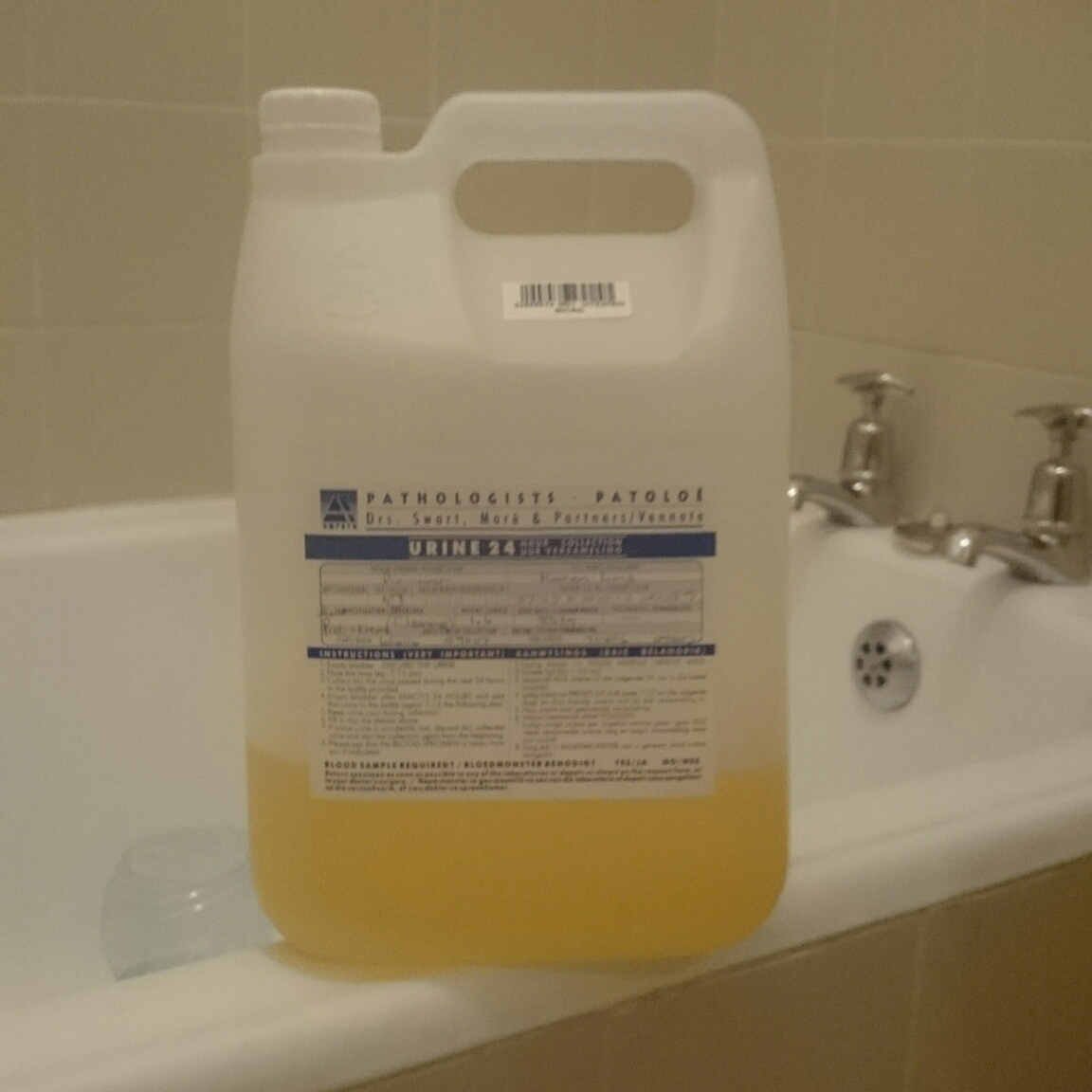 This was some time later. 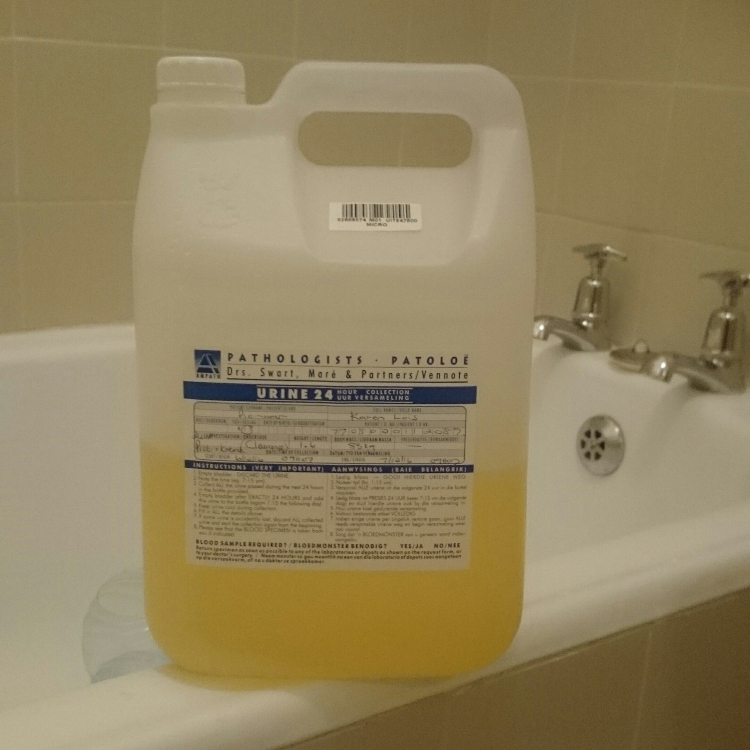 And what I returned the next morning: 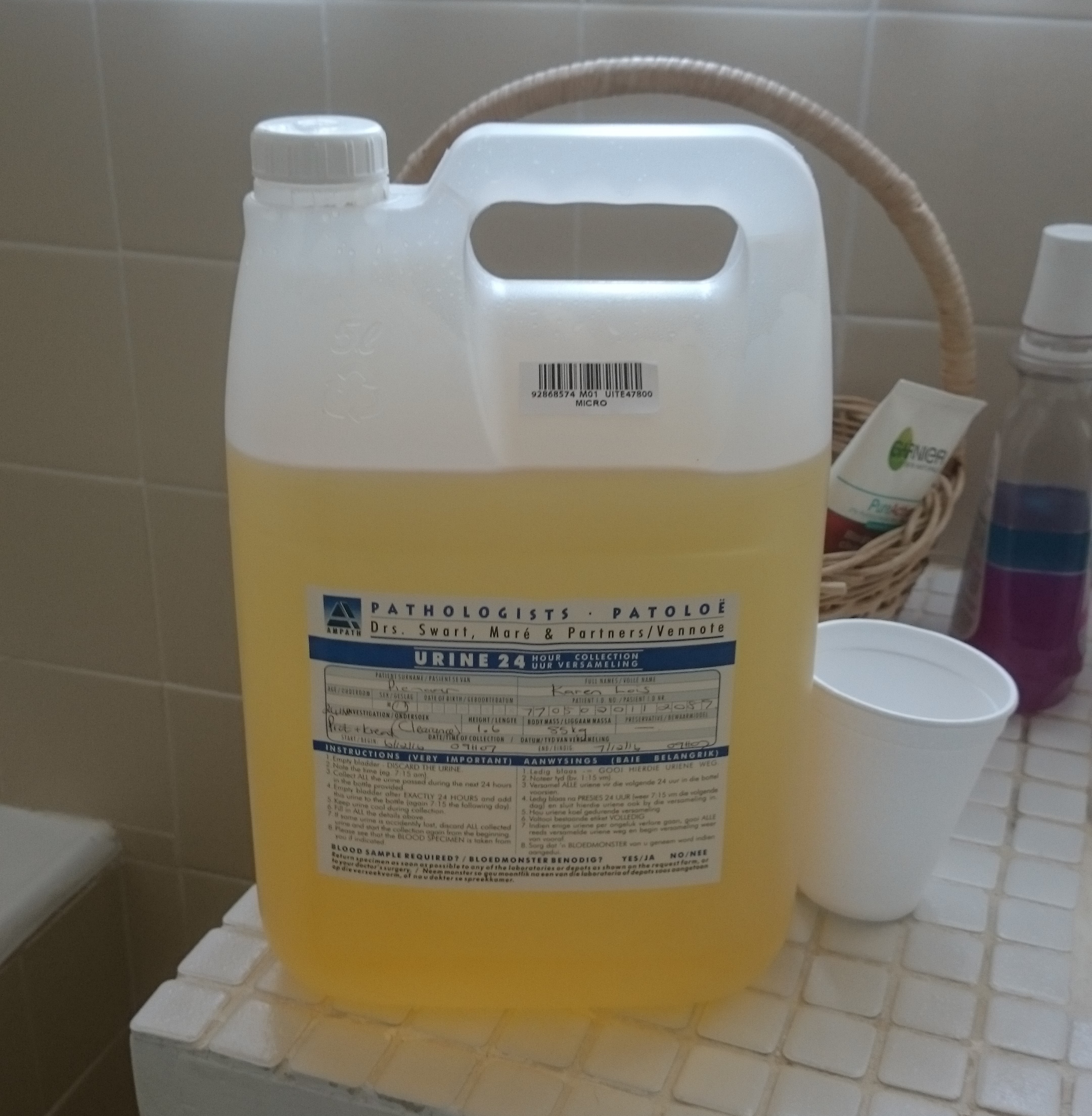 Needless to say,  I felt really overly proud of our kidneys. When I spoke to the transplant coordinator … well, she actually said it looked “good”.

There was one more hoop to jump for the year and that was a visit to my psychiatrist. It was not the official psychological evaluation, but something I needed to get done.

With this done and dusted the transplant coordinator has basically told me: “Let me know what you weight in January.”

From prior experience, there are two things I know about dieting.

The first is: Don’t tell anyone until they notice. The second: Don’t do it in December.

Despite breaking both these rules, I’m feeling quite determined.