The Mental Health Paradox in Treatment

Remember Jack Nicholson in “As Good as it Gets” asking the doctor how he (the doctor) could diagnose him (Nicholson) as obsessive compulsive and then blame him for storming into the doctor’s office?

It seems an extreme example – but it’s still funny.

Yet in our times by far the worst injustice to the mentally ill is perpetrated by the very medical professionals who are supposed to help. And, if it happens to you, it’s not always funny.

The very people who should understand how incredibly hard it is for the mentally ill to “act normal” – follow the most stringent ethical rules of their profession and apply them indiscriminately to unsuspecting patients who will inevitably fail at upholding these norms – not because they didn’t want to or didn’t try, but because it just isn’t possible for them to be what they are not.

I have come to some substantial new insights since I wrote this post. The original intent wasn’t malice, although I freely admit the whining.

Perhaps I would have expressed myself better by saying I could not manage – especially in the long run – what was expected of me. I was supposed to be brave and for some time I was, but eventually, I became worn down and tired. It is much easier to make mistakes when tired.  Unfortunately, we have to live with the mistakes we make during stressful times as much as any other.

Also, I do not know enough about the strategies followed by psychotherapists to evaluate my particular situation – it is this lack of understanding which is still wearing me down. 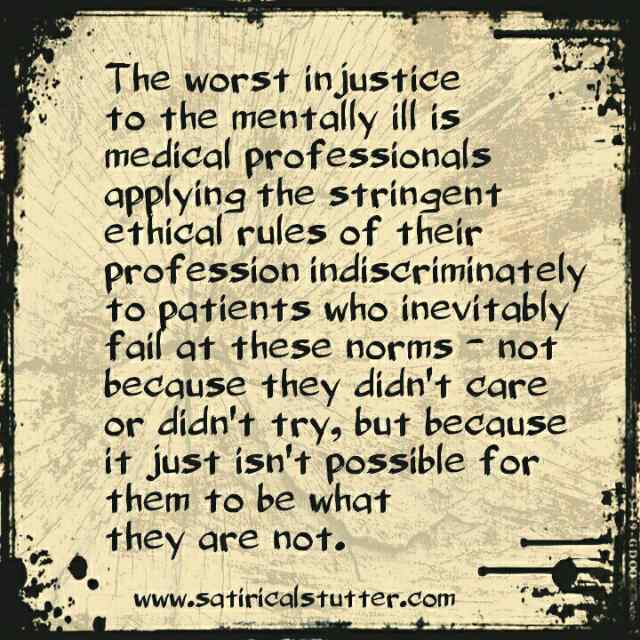